Finding your face in a football crowd after 30 years 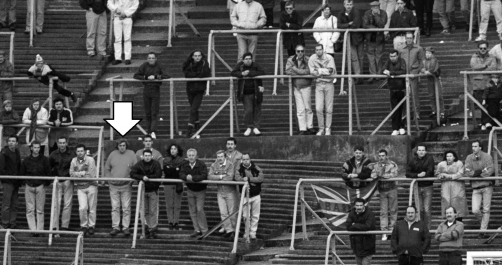 Wednesday mornings in the life of one YPWD attendee are filled with memories and reminiscence of his time following his beloved football team Wolverhampton Wanderers. Every week myself and Stuart talk about his time spent supporting the club that he has followed for 30 years. We talk about anything from ex-club legends, to the club shirts and even the playing surfaces.  As a season ticket holder in the Billy Wright Stand Stuart cheered on Wolves on their journey through the divisions, from the old fourth-division to the dizzying heights of the Premier League.

Stuart became hooked on attending Matches at Molineux, after moving down to Wolverhampton from his native Scotland, and his passion has never wavered. Back in the days of terracing Stuart would regularly attend matches, queuing up at the turn-styles on the day of the match as everyone would and squeeze through to find his spot on the terrace to cheer on the team. He told me that the crowds were very much on the low side during Wolves’ days fighting it out in the old fourth-division. He has seen the stadium, known as Molineux, and team be transformed beyond all recognition during his time as a supporter.

Only last week Stuart and I were looking over some old photos of Molineux and talking about the changes, and then we spotted something we were not expecting. Staring back at us from an old photograph was Stuart on the terracing! Just by pure chance! Stuart was attending the Wolves vs Barnsley match in 1991. Stuart and his Family recognised him straight away. A lovely moment in what certainly is a small world!

Stuart still spends lots of time reading about and watching his beloved Wolves on TV. He attended his last game last season. He used to regularly catch the train to the matches from Wokingham!

Stuart is hoping Wolves can qualify for next season’s Champions League when the Premiership restarts in the coming weeks. That will certainly add to our ever-growing list of things to talk about and we’re also going to keep a close eye on the pictures we come across of the crowd too!