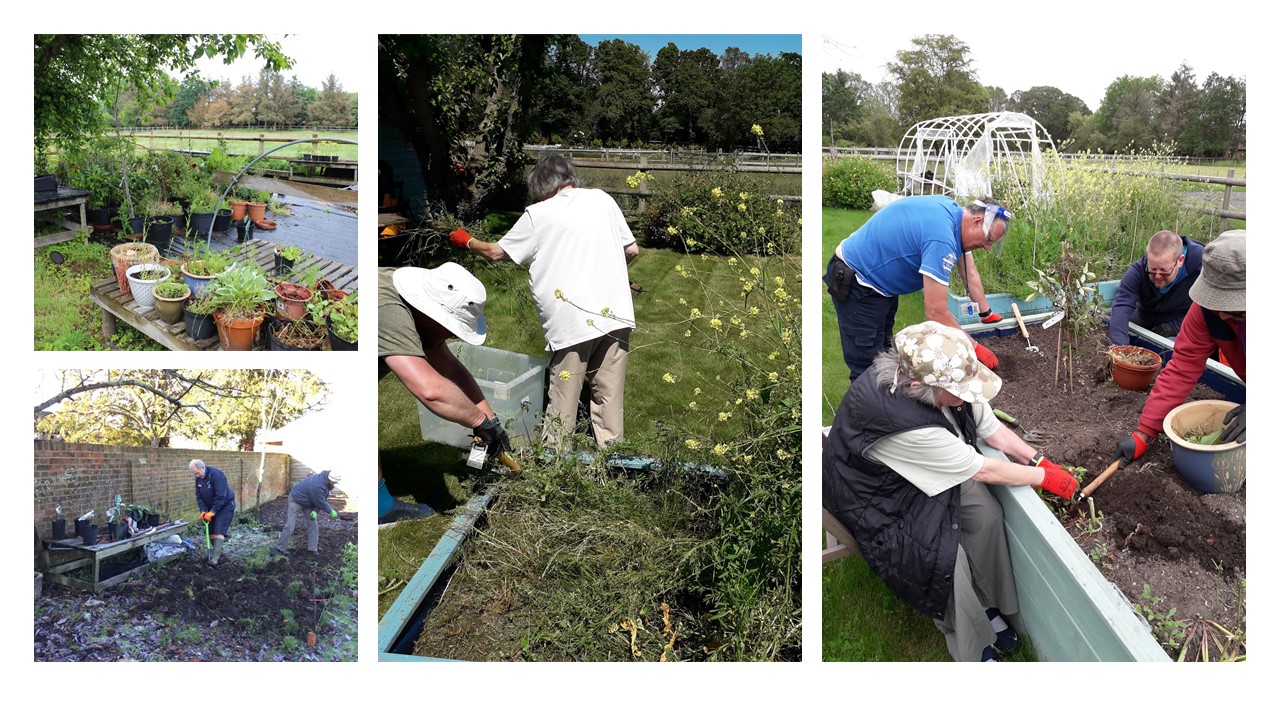 Phil Redrup reflects on the two years that we have been using the Old Rectory Garden at Padworth. From a ramshackle plot of land to a beautiful space to relax and soak up nature. Phil explains where we've come from and where we are now.

In Early 2019 we had access to a plot of land and a small building for our use, the building consisting of a large room with a small area for cooking, and a small utility room on the back that includes a toilet.

Outside we were presented with a large space that had been neglected, except for the large amounts of Plants that the owner had bought from a bankrupt garden centre, and they had been sitting in the pots for a year or two so most were extremely pot bound or dead.

We cleared the site over the first workshop, and Brian the owner was able to level and re-grass the land.

We were able to have cooking and Art Workshops alongside Gardening being able to use the building to accommodate this.

A plan began to formulate, and a large and small shed were purchased together with a polytunnel, we had a storm one night and we arrived to find a very large branch had fallen from a Mulberry tree, it fell toward the Polytunnel, but Brian saved the day by having one of his men trim the whole tree back.

We were able to start to use the land properly, the Attendees loved Padworth as it became very popular and soon new friendships were made within the group, some of the carers also formed bonds, for after dropping their partners off they would go for a coffee or lunch together.

On one of the workshop days a BBQ and games had been organised which everyone including carers were invited to view all the work we had carried out over the few months with a bit of fun thrown in, one workshop, the cookery class, made a picnic hamper full of goodies for all of us to enjoy and the sun shone to make it a perfect day.

We made planters and dug over a large piece of ground near an old wall ready for a cottage garden, now we had the space for a touch colour sensory garden, a smell sensory and a place to grow the seedlings.

Covid struck and all stopped! I was able to visit from time to time, but the real worry was all the hard work had looked like it had been wasted.

We managed to start back ten months later following government guidelines with smaller groups but have to be outside, the charity purchased a gazebo to keep out the worst of any inclement weather, but we were faced with a daunting task of again a neglected weed strewn garden and to top it all another storm had ripped off the polytunnel covering.

What was great was no one was down hearted and within five weeks we were ready for planting. One of the planters was to have been a vegetable bed but had grown grass and oil seed instead, this was cleared and the whole bed has potatoes in it now hopefully to be harvested in six weeks, then leeks to be put in for the winter.

We have made a trellis for a Clematis to grow up, weeding has become a weekly task as so much weed seed has managed to fall onto the once virgin ground, but this is taken in the group’s stride as it becomes a very social part of the garden process as the planters can be weeded from a chair at leisure.

The polytunnel was cleared inside as it had clearly become an eyesore looking like a white skeleton! We sat around after discussing what to do next when it was suggested rather than purchase a new cover for it to possibly be ripped off again, or to dismantle and throw away, we grow climbers over it and put a bench inside so it will become a cool place to sit in the summer and have a heavy scent from the carefully chosen plants that will cover it.

We still have to plant up our cottage garden area which is heavily weeded at the moment, but as luck would have it a chance view on social media, a home owner wants to get rid of five large planters including soil, so the plan is to use the wood to build two long planters in the Cottage garden space and rather than weed we would then lay thick cardboard down and then cover with soil ready for planting.

A garden is an ever evolving place so the plans will be forever changing, together with the plants, it is a place for contemplation, stillness, stress free and definitely a boost for everyone’s wellbeing. I’ll leave you with one of my favourite quotes – to plant a garden is to believe in tomorrow.