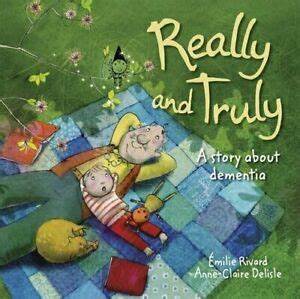 Our thanks go out to our Trustee Alain Wilkes who has reviewed this book along with his granddaughter. This book and many others are available from the YPWD library so do contact us if you'd like to borrow one.

Having read “Visiting Grandad’s new home”, my granddaughter (Charlotte, aged 9), was keen to read this book.

When I asked her what she had thought of the book her immediate reaction was to point out all the pen and ink line drawings scattered throughout the book’s illustrations. They were funny and I could see why Charlotte had focussed on them first. There were pirates, witches, pixies, and lots of animals. Some fed off the story, others seemed to be there at random.

Asked about the story itself, Charlotte said that she had been quite sad towards the end but happier by the time the story finished. She again understood what dementia was and could illustrate this, but went on to say that it mainly affected men. When I explained that it also affected women and that there was another book about visiting grandma’s new home, she asked to read that too. As before, Charlotte seemed quite matter of fact – something of a contrast when my daughter read it – but that may have had something to do with the fact that the boy’s name in the story was Charlie and she had a three year old son called Charlie. She said that it had nearly brought her to tears.

Having now read the story a number of times I think it is very well written and quite humorous in its approach. But it does pack a punch. It starts with a grandad telling Charlie lots of fantastical stories and ends with Charlie trying to reach his grandad, who now has quite advanced dementia, through acting out some similarly fantastical stories. And he succeeds. At the end of the book he is planning what to do next but what hovers in the air is whether and at what point his efforts will no longer be successful. But that might be an adult take, rather than a young person.

Overall, I would highly recommend this book, though perhaps for a slightly older age group than my granddaughter.